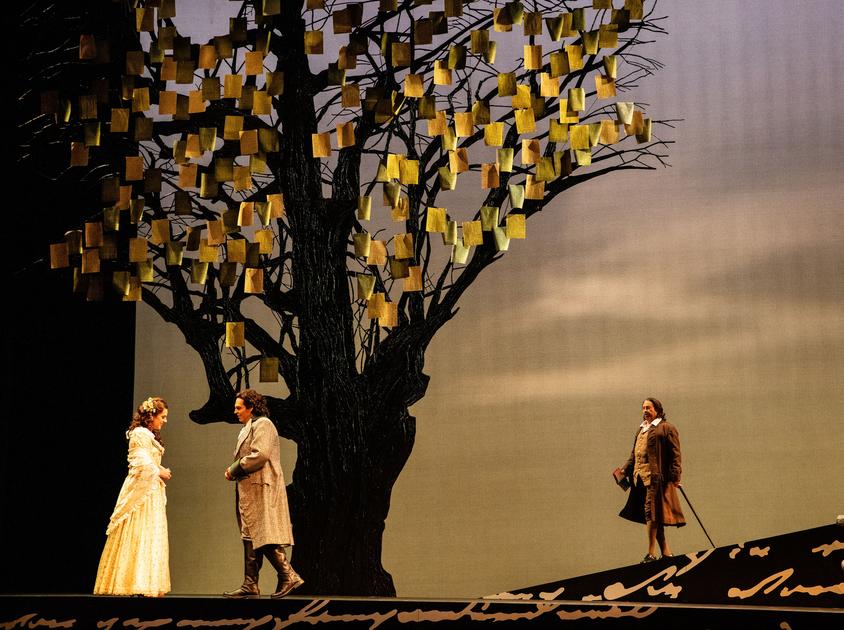 Florida Grand Opera is concluding its 2018 – 2019 Season in brilliant fashion with an impressive, inspired staging of Jules Massenet’s Werther, loosely based on the epistolary novel, The Sorrows of Young Werther, by Johann Wolfgang von Goethe.  First published in 1774, the young Goethe’s tale of an ill-fated love affair created an immediate sensation, one might even say a craze, touching off a slew of copycat suicides around the Continent. Massenet’s version, as thrillingly scored and dramatized by the composer and a trio of librettists, still packs a considerable emotional wallop.

The story centers on the tragic, doomed relationship between young Charlotte, the dutiful daughter of a widowed town magistrate, who must choose between honorable loyalty to Albert, her husband in an arranged marriage, and Werther, the hyper-romantic artist who, it turns out, literally cannot live without her.

For this production, Florida Grand Opera has assembled a terrific international cast, all of whom sing impressively and invest their characters with engaging, vibrant life. Tenor Dimitri Pittas lends a commanding voice and presence to the emotionally challenging part of the impassioned young lover. It’s hard to imagine a better sung Werther. Mezzo-soprano Daniela Mack is a compelling Charlotte. Her voice is rich and powerfully expressive, and she brings considerable complexity and depth to this demanding role. Baritone Benjamin Dickerson delivers an affecting and sympathetic portrayal of Albert. As he did as Schaunard in Florida Grand Opera’s recent La Bohème, he sings impressively while infusing his character with a believable humanity and engaging likeability. Soprano Evan Kardon imbues the role of Sophie, Charlotte’s sweet-tempered young sister, with an appealing naiveté, and her ode to laughter in Act 3 is charmingly sung. Bass-baritone Jake Gardner sings authoritatively as Charlotte’s magistrate father, while tenor Dominick Corbacio and bass-baritone Rafael Porto provide the requisite comic relief, hamming it up in fine voice as the magistrate’s carousing drinking buddies.

As conductor Joseph Mechavich remarks in his program notes, in Massenet’s score the orchestra is veritably a character in its own right, beautifully following and amplifying the emotional arc, shifting moods, undergirding and at times carrying the action. Mechavich conducts with great feeling and precision, particularly during Werner and Charlotte’s highly charged, emotionally wrenching duets. Michael Baumgarten’s stylized, minimalist set and striking lighting design effectively focuses the action, as does Lawrence Edelson’s savvy staging, which includes clever directorial touches such as incorporating a recurring dance motif into the blocking for Werther and Charlotte.

All these things together provided a splendid coda for Florida Grand Opera’s 2018 – 2019 Season, capping it off with an appreciative standing ovation on Werther’s opening night.

By Tony Guzman
As the third entry in its 2018 – 2019 season, Florida Grand Opera is offering a flamboyant and fascinating staging of composer Robert Xavier Rodriguez’s biopic opera, Frida. The book, by Hillary Belcher, affords a sort of Cook’s tour of the still provocative painter, Frida Kahlo’s life, focusing on her tempestuous, intense relationship with the renowned Mexican muralist, Diego Rivera, her passion for her deeply personal art, and her radical populist politics; while the vivid lyrics and monologues by Migdalia Cruz adeptly flesh out and deepen the themes and issues that drive the story of Kahlo’s life. The dialogue is mostly spoken rather than sung, and Rodríguez himself has described Frida as being "in the Gershwin, Sondheim, Kurt Weill tradition of dissolving the barriers and extending the common ground between opera and musical theater." Rodriguez’s score is a colorful amalgam of Mexican folk and dance-themed melodies, early jazz and ragtime, with dashes of accordion for an Astor Piazzolla-like, tango effect.

This production is directed and choreographed by Marco Pelle from the New York Theatre Ballet, and he has fashioned a continuous, flowing progression of music, dance and drama that reflects the contours and trajectory of Frida Kahlo’s extraordinary, passionately lived life.

The set, designed by Moníka Essen, is a surrealistic assemblage incorporating writhing foliage-like sculpture, a human heart, jagged shards showing details from Kahlo’s paintings, and projected paintings and film footage. Essen’s costume design incorporates the calavera, the eerie skull associated with Mexico’s Day of the Dead, as a death mask for a trio of dancers, sometimes joined by similarly costumed supernumeraries, who serve as a sort of Greek chorus for Frida, who was always intimately involved with death following a horrific, crippling bus accident suffered in her teens.

Since so much of Frida’s life story is seen through the prism of her tumultuous relationship with Diego Rivera, it’s fortunate indeed that this FGO production is propelled by two powerhouse performances by the leads. As Frida, soprano Catalina Cuervo is all passion and musicality in a performance that is as committed as Frida herself was to her causes and her ideals. Ricardo Herrera delivers a compellingly sincere performance as Diego Rivera, and his seemingly effortless delivery belies the impressive power and penetration of his rich bass-baritone voice. Among the artists performing in multiple supporting roles, particularly effective were soprano Jessica E. Jones, affecting and genuine as Kahlo’s sister, Cristina, baritone Benjamin Dickerson as her father, tenor Dominick Corbacio, as the boyfriend of her youth and, later, as Leon Trotsky, and mezzo-soprano Marín Zaray Rodriguez as a fiery rival for Diego’s affections.

Florida Grand Opera’s third offering of its 2017 – 2018 Season is a vibrant and affecting staging of Orfeo ed Euridice by Christoph Willibald Gluck. Gluck’s enchanting musical setting of the classic mythological tale of the minstrel Orpheus and his descent into the Underworld to reclaim his beloved wife Euridice premiered in Vienna in 1762. Along with conductor Anthony Barrese’s fluidly limpid handling of Gluck’s score, much of this production’s appeal comes from director/choreographer Keturah Stickann’s charmingly eclectic approach, which combines the elegantly classical and the breezily contemporary for a timeless effect. She’s particularly successful in visually interpreting long passages carried by the orchestra and in integrating the FGO Chorus with dancers from Dimensions Dance Theater of Miami – the dancers and chorus melding seamlessly to considerable dramatic effect. Also effective are the costumes by Heidi Zamora, ranging from the breezy simplicity of her garb for the happy spirits Orfeo encounters in the Elysian Fields to the striking orange and black costumes for the furies and ghost blocking his way through the underworld.

As Orfeo, countertenor Anthony Roth Costanzo handles Gluck’s liltingly beautiful arias with great agility and delicacy of phrasing. In performance the countertenor voice can have an odd, spectral quality that can be off-putting for dramatic purposes, but Costanzo’s singing voice is rather more full-bodied and emotive than falsetto-like and odd. (The other option, for a part originally written for castrato, is to have it performed by a mezzo soprano or contralto as a trouser role – and, indeed, Costanzo is rotating the part with mezzo/contralto Lindsay Ammann.)

In a production that offers many pleasures, perhaps the most delightful and appealing is soprano Jessica E. Jones’ beautifully sung and acted Euridice. Radiant and beguiling, Jones marvelously captures Euridice’s confusion, then anger, at Orpheus’ (to her) unfathomable refusal to look her way. Vibrant and emotive, her Euridice nicely counterbalances Costanzo’s classically cool, somewhat detached Orpheus. She gives us a Euridice plausibly worth going to hell and back for, and the opera’s Triumph of Love finale is a thoroughly satisfying aesthetic and emotional experience – something that can be said for this entire exhilarating production.

​The second entry of Florida Grand Opera’s 2017 – 2018 season is a powerfully sung, exquisitely conducted staging of Richard Strauss’ Salome.  It’s the ultimate “Hell has no fury” story, lifted from St. Matthew’s gospel, via an Oscar Wilde play, and given a vividly imagined, richly poetic libretto and sumptuously dramatic score by Herr Strauss.

Timothy Myers conducts the FGO orchestra with savvy and considerable finesse – subtly undergirding the dialogue and plot for much of the time, then burgeoning forth lushly in the sections where the music is meant to carry the action.

Soprano Melody Moore (who is rotating the lead role with Kirsten Chambers) is a formidable dramatic soprano, and she gives a bravura turn in Salome’s wildly dramatic aria (singing to Jochanaan’s decapitated head) towards the end.

For our taste, though, the highlight of this production is the brilliantly comedic tour de force that “character tenor” John Easterlin regales us with as a delightfully depraved Herod. While singing with authority and verve, his priceless reactions and endlessly inventive physical shtick are hilariously realized.

Liz Potter notes: Melody Moore is magnificent as a Wagnerian soprano in her title role as Salome.  Her dramatic interpretation of unbounded psychosexual depravity does not fail to potently deliver the shock of a mind-blowing conclusion to this infamous and frequently censored Opera. We highly recommend that you see FGO's modern interpretation ofSalome!

Before Night Falls at Florida Grand Opera
By Tony Guzman

The third entry in Florida Grand Opera’s 2016-2017 season is Before Night Falls, composer Jorge Martín’s opera based on the autobiographical memoir by Cuban novelist and poet, Reinaldo Arenas. Like the book and the fine film adaptation by Julian Schnabel starring Javier Bardem, Martín chose to cover the entire sweep of Arenas’ life, from his boyhood in rural Cuba through his persecution for homosexuality and the suppression of his writings by the Castro regime, to his brutal imprisonment and eventual escape to the United States as part of the Mariel boatlift – only to die in New York City as part of the newly spreading “Gay disease,” AIDS. It’s a story of indomitable will and resistance in the face of soul-crushing political oppression.

Befitting the tale of a poet, the libretto by Martín and his collaborator, Dolores M. Koch, is itself a work of considerable poetic depth, and the cinematic sweep of the film is very ably approximated by Riccardo Hernandez’ set which fluidly incorporates scrims and panels which are raised and lowered or rolled onstage, and upon which projection designer Peter Nigrini projects images ranging from palm trees to Communist ichnography to Manhattan tenements.

Director David Gately infuses every aspect of the production with emotional commitment and a lyric sensibility.

As Reinaldo Arenas, baritone Elliot Madore turns in a tour de force performance that’s powerfully sung with an intensity of focus and emotional commitment that is both impressive and moving.

Doubling as Reinaldo’s always supportive mother, as well as The Moon, one of his muses, Cuban soprano Elizabeth Caballero delivers affecting performances that are sung with tender, aching beauty.

Another standout is tenor Dinyar Vania in the role of Ovidio, an older mentor character. His powerfully sung aria on the role of Beauty is a particular highlight of a superlative score.

Tenor Michael Kuhn is engaging in the role of Arenas’ devoted friend Lazaro. His farewell aria with Madore as Lazaro departs from Cuba is as beautiful a melding of baritone and tenor singing as you’re likely to ever hear.

Bass-baritone Calvin Griffin is effective in the polemically thankless part of Victor, the rebel leader turned government enforcer. His singing is suitably authoritative for the face of authoritarianism in the opera.

Other noteworthy performances are turned in by tenor Javier Abreu, engaging as Reinaldo’s childhood friend, Pepe, and mezzo-soprano Melissa Fajardo, as the writer’s other muse, The Sea.

Conductor Christopher Allen conducts the FGO Orchestra with subtlety and passion and the audience’s appreciation was obvious from the spirited ovation the conductor and players received prior to the start of the second of the opera’s two acts.

But the real star of this opera is the deeply poetic and thoughtful libretto and, especially, Jorge Martín’s richly expressive music and lucid orchestration. Incorporating some phrasings reminiscent of Cuba’s master tunesmith, Ernesto Lecuona, as well as Hollywood musical evocations of “South of the Border,” Martin channels opera’s recognizable musical traditions to forge a truly original, moving and dramatically effective score.

Through March 25 at the Adrienne Arsht Center for the Performing Arts.